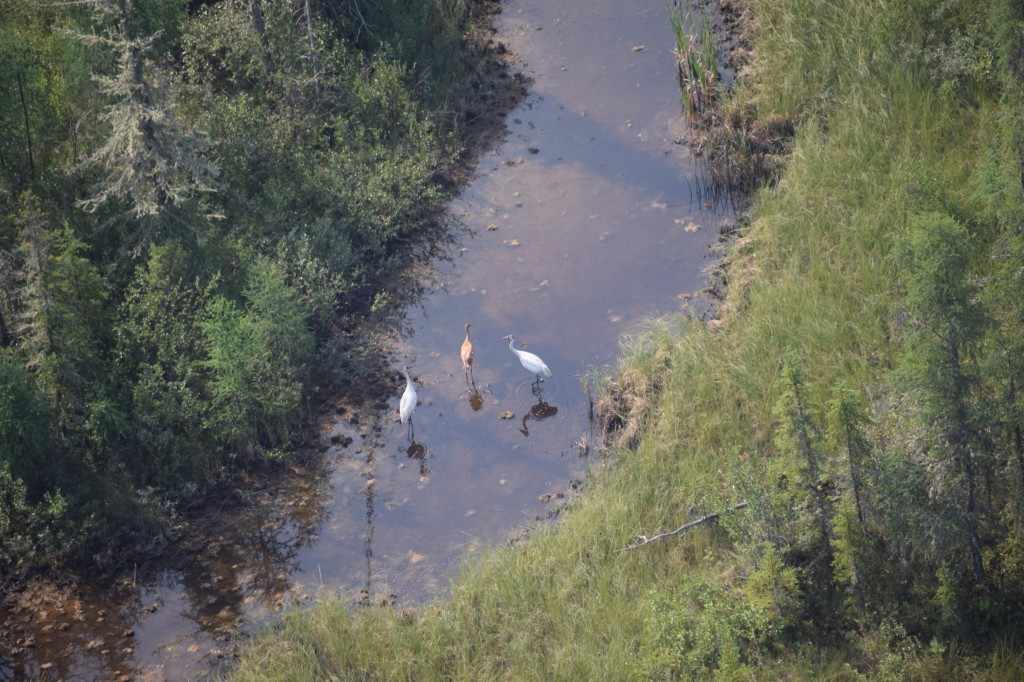 WBNP officials reported that a total of 202 whoopers were counted, including the fledgling and nesting pairs.  Fledglings are birds that have reached an age where they can fly. The 32 fledglings were found in 30 family groups: 28 families with one chick and two families with two chicks. In addition to the family groups, the surveyors observed 6 groups of three whooping cranes, 43 groups of two, and 6 individual cranes.

Data from the survey are used to document the breeding success of the whooping crane population. WBNP’s preliminary analysis shows that the number of young fledged per nest is 0.39, which is lower than the 20-year average of 0.48, but is similar to last year’s rate, and within the normal range of variation. During the 2013 survey, 28 chicks were produced from 74 nests for a breeding success rate of .38 fledged young per nest. There were no nests with two fledglings last year.

Knowing annual breeding success allows Parks Canada, the Canadian Wildlife Service, the U.S. Fish and Wildlife Service and other conservation partners to effectively manage issues related to the whooping cranes recovery. By counting the number of fledgling chicks, officials gain important insights into the health of the world’s last remaining natural nesting flock of whoopers which contributes greatly to the ongoing stewardship of these magnificent birds.

A record number of 164 whooping cranes had been counted incubating their eggs in 82 nests during the annual survey in June 2014.  This number surpasses a previous record of 76 nests in spring 2011.  These endangered birds all nest in and around WBNP, Canada. The whooper fledgling count is one of two annual surveys that are part of the world-class restoration plan that has made the whooping crane an international success story and symbol of species recovery and conservation. The mission of the survey was to determine how many chicks had hatched and survived to become fledglings since the nest counts were made in June.

Fledglings whooping cranes must be strong fliers so they can fairly soon complete their 2,500 mile migration with their parents to Aransas National Wildlife Refuge, their winter home on the Texas coast. According to the U.S. Fish and Wildlife Service, during March and April 2014 an estimated 300 whooping cranes migrated to Canada from their winter habitat on Aransas Refuge. The birds arrived on Wood Buffalo during April 2014 and began their nesting activities soon thereafter. The nesting whoopers cannot waste time because they must build their nest, lay and incubate their eggs and raise their young within 5 or 6 months. The juveniles must grow fast to be prepared for the 2,500 mile migration back to Aransas Refuge by November. Their Wood Buffalo nesting grounds freeze over early.

WBNP Staff spent 4 days flying over the Whooping Crane Nesting Area in an attempt to locate the whoopers (Figure 2). Nesting pairs normally use the same territory each year to build their nest and raise their chicks.  In late-May, nesting locations are collected during the annual Nest Survey.  Surveyors use a laptop computer running mobile mapping software to record the nest locations. Knowing where the cranes nest helps make locating the adults and juveniles a bit more successful. Both the Nest Survey and the Fledging Survey are part of the world-class restoration  plan that has made the whooping crane an international success story and symbol of species recovery and conservation. By counting the number of fledging chicks, Parks Canada, Canadian Wildlife Service, US Fish and Wildlife Service, and others gain important insights into the health of  the world’s last remaining natural nesting flock that contribute greatly to our ongoing stewardship of these magnificent birds.

Adult cranes (Figure 4) are easier to spot because of their white plumage. Juveniles with their brown-orange plumage are more difficult to locate especially in colorful vegetation. Those involved in the aerial surveys must be careful observers and stay alert to spot all the nesting whooping cranes and their chicks in the vast wetlands of Wood Buffalo National Park.

by Chester McConnell, Friends of the Wild Whoopers

***** FOTWW’s mission is to help preserve and protect the Aransas/Wood Buffalo population of
wild whooping cranes and their habitat. *****

School is out for the summer and it’s time to get kids to read books. Friends of the Wild Whoopers recommends “The Crane Track: Whooping Cranes’ Migration … A Tale of Survival” by Gene Steffen.

The Crane Track uses factual information to build an interesting story. It’s about a two adult whooping cranes and their young chick, Leki. It describes some scary events during their time in the Wood Buffalo nesting area. And then it follows them while they make a 2,400 migration from the Northwest Territories in Canada to Texas.

Leki, the young whooping crane has no idea that a spectacular journey is about to begin. He lives with his parents, Toluki and Karla, in the Northwest Territories of Canada. Leki has had many adventures there, like the day he ran across wild wolves! Still, his biggest adventure is yet to come as his parents prepare for their annual October migration.

Every year, the whooping cranes travel south to warmer climates for the winter. Toluki and Karla plan to take young Leki 2,400 miles, all the way from their home in Canada to a winter resting place near the Gulf of Mexico. The path they take is called “the crane track,” and it is a journey filled with wild weather and hungry hunters.

Whooping cranes are graceful creatures with white feathers and up to an eight-foot wingspan. Once almost extinct, there are now 304 wild whooping cranes in the population that migrates from Wood Buffalo National Park, Canada to Aransas National Wildlife Refuge, Texas. All whoopers in this population travel the same path as Leki and his parents. Nature is a carefully balanced, beautiful machine. It’s up to us to protect the path of the cranes’ migratory journey. So is little Leki up for the trip?

The book follows the Track the cranes make twice each year and was featured on a National Geographic special, Flight of the Whooping Crane. The author, Gene Steffen, was the pilot during the making of that film. This is a great story to teach children about geography, endangered species, migration and the general wonder of our natural environment.

One source for the book is Amazon.com

Parks Canada reports that there are currently 17 wildfires in Wood Buffalo National Park, nesting habitat of the endangered whooping cranes. Friends of the Wild Whoopers was advised that the fires are not a threat to the whooping cranes. Significant rain in parts of the park have helped fire suppression efforts. However, Parks Canada fire management personnel remain vigilant looking for new starts and will continue monitoring existing fires.

Due to the reduced wildfire hazard, Fire Information Updates from Parks Canada will no longer be produced daily, but rather as the situation warrants. The latest Wood Buffalo National Park wildfire information is always available through the Fire Information Line at (867)872-0107.

There are currently 13 wildfires in Wood Buffalo National Park. Fires 3, 7 and 8 are within the whooping crane nesting area but currently pose no threat to the cranes. Friends of the Wild Whoopers is providing this information in cooperation with Parks Canada for our Canadian viewers who may be visiting the park in the near future.

Fire 1 is located in the Caribou Mountains 5 kilometres to the west of Isidore Lake. It is currently 21,000 hectares. It is being monitored and currently poses no threat to values at risk.

WBNP Fire 2 is located four kilometres north of Pine Lake and to the immediate west of the Pine Lake Road and covers 43,267 hectares. A Parks Canada Incident Management Team and additional Parks Canada fire crews are working with local WBNP Fire Management. This fire and fires 4 and 5 are being managed as the Fire 2 Complex. Fire fighting activities along the Pine Lake Road and north of Pine Lake continue. Fire crews are monitoring and extinguishing hot spots and conducting controlled burnout operations to reduce high-risk fuels that could present a threat to Pine Lake Road. High volume sprinklers have been deployed to Pine Lake for facility protection should it be required.

Fire 3 is a 200 hectare fire located approximately 10 kilometres south of NWT Highway 5 and 75 kilometres west of Fort Smith. It is being monitored and currently shows little fire activity.

Fire 4 is a 4684 hectare fire located 12 Kilometres south of Highway 5 and 45 kilometres to the west of Fort Smith. Growth on this fire is currently low, but a plan to keep the fire well to the south of the highway has been implemented. The plan involves small-scale strategic burnouts to remove volatile fuels and refreshing the cat guard along the northern park boundary to assist with containment. This fire poses no threat to Highway 5 at this time.

Fire 5 is a 43 hectare fire located 35 kilometres southwest of Fort Smith and 20 kilometres south of Highway 5. Is it being monitored and currently poses no threat to any values at risk.

Fire 6 is a small spot fire located in a remote area in the west of the park about 12 kilometres north of the Caribou Mountains. It is being monitored and currently poses not threat to values at risk.

Fire 7 is a small spot fire located 20 kilometres north of Highway 5. It is being monitored and currently poses no threat to any values at risk.

Fire 8 is a small spot fire located in the extreme northern end of the park. It is being monitored and currently represents no threats to any values at risk.