Homer Moyers, Jr. and his wife had gone to Aransas National Wildlife Refuge in the spring for the first time to photograph the whooping cranes at the refuge. However, the morning of their trip was so foggy all of their photos were pretty disappointing. At that time they decided they had to go back in November and indeed they did return. They found out about Kevin Sim’s charter boats, Aransas Bay Birding Charters, and booked a trip on the Jack Flash.

Monday, November 25 2019, was a beautiful morning for observing and photographing all the various birds on the refuge. Homer sent us some photos taken during their outing and we have compiled them into short slideshow for your enjoyment.

Friends of the Wild Whoopers thanks Homer for sending us the fabulous photos and we are sure that you will enjoy them as much as we did.

Friends of the Wild Whoopers is a nonprofit 501(c)3 organization.
FOTWW on GuideStar

It seemed like fall would never arrive after a long, hot summer, but cooler, shorter days have finally made an appearance with many species of migrants now frequenting the friendly skies!  Whooping Crane migration is in full swing and the first pair of our winter residents was reported by photographer John Humbert in the Seadrift area on October 9.  Regular U.S. migration hotspots like Quivira NWR in Kansas have already reported their first whooping cranes of the season as well. If you have a question on whether the bird that you saw is a whooping crane or not, take a look at Texas Whooper Watch:  Whooping Crane Look-Alikes.

It was an average breeding year in Wood Buffalo National Park (WBNP), with 97 nests counted in May producing an estimated 37 fledged whooping cranes counted in August that are headed South on their first migration to Texas. With a relatively low chick recruitment (24) the previous summer (2018), the overall population size did not grow last year, but remained stable at an estimated 504 individuals.

The Whooping Crane migration from WBNP to Aransas NWR is about 2,500 miles in length and can take up to 50 days to complete. It is common for whooping cranes to spend a long period of time in Saskatchewan this time of year, “staging” for fall migration by foraging on abundant agricultural waste grains. Our partners with the Canadian Wildlife Service are actively monitoring whooping cranes in Saskatchewan now and have reported seeing several of our marked birds.  As of October 23, 14 marked birds were still north of the border in fall staging areas of Central Saskatchewan, one of them was in North Dakota, one was in South Dakota, one was in Kansas, one was in Oklahoma, and one was on the Blackjack Unit of Aransas NWR.  There is a slight chance that some marked cranes are still on their breeding grounds in WBNP, but the lack of cellular towers make them untrackable until they begin to head south.

Be sure to report any Texas migration sightings via Texas Whooper Watch.

You might remember last fall and winter was a record wet period and we seem to be headed the other direction this year. This summer and fall was quite dry, with September, typically one of our wettest months of the year, only producing 2.94” of rain at Aransas NWR (2.94” of rain). Thus, much of the standing water that we saw across the Refuge last winter is now gone and freshwater wetlands are shrinking somewhat. Since June, we have recorded 10.94” of rain and much of the whooping crane wintering range is currently in the “moderate drought” category with the NWS 3-month outlook mixed in regards to what the future holds.

We were able to burn a 3,780-acre unit on Matagorda Island on June 15. The area we burned consists of upland prairies that are adjacent to coastal marsh areas heavily used by whooping cranes.  We also burned an additional 4,400+ acres on the Tatton and Blackjack Units.  By maintaining coastal prairie habitats in a relatively open, brush-free condition, we provide additional foraging habitat that whooping cranes normally would not be able to access. Summer burns are often provide more effective at suppressing brush species in our prairies than winter burns, thus are an important tool for us at Aransas NWR.

August 6, 2019
by Pam Bates, Friends of the Wild Whoopers

McConnell explains that, “Habitat is the most important need of the endangered Aransas-Wood Buffalo Whooping Crane population. It is the only remaining wild, self-sustaining Whooping Crane population on planet Earth. The Aransas-Wood Buffalo Whooping Cranes can take care of themselves with two exceptions. They need man to help protect their habitat and for people not to shoot them.” So FOTWW is dedicated to protecting and managing existing and potential “stopover habitat” where we can. Whoopers need many areas to stop, rest and feed during their two annual 2,500 mile migrations from Canada to the Texas coast.

During past 60 years, most interest in Whooping Crane habitat has focused on Aransas National Wildlife Refuge on the Texas coast and Wood Buffalo National Park in Canada. Aransas Refuge is the wintering habitat and Wood Buffalo is the nesting habitat for the cranes. This major focus on Aransas and Wood Buffalo habitats has been a wise management decision but over time the need for morel focus is needed on “stopover habitats”. In the past, most of the “stopover habitats” have been on small farm ponds and wetlands. Unfortunately for Whooping Cranes and many other wildlife species, these habitats have been and are being lost at an alarming rate due to changing land uses including larger agriculture fields and various kinds of development.

Unfortunately, relatively little interest has focused on “stopover habitat” where the Whoopers stop to rest and feed every night during migration. These stopover locations are scattered all along the 2,500 mile long migration corridor between Aransas Refuge and Wood Buffalo. Chester McConnell, FOTWW’s wildlife biologist stresses that “stopover habitats” are absolutely necessary and the Whooping Crane population could not exist without these areas. Importantly, Whooping Cranes spend 8 to 10 weeks migrating from their Wood Buffalo nesting grounds to their Aransas National Wildlife Refuge winter habitat. They cannot fly the total 2,500 mile distance without stopping to feed and rest. 15 to 30 times. They need many “stopover habitats” along the migration corridor to fulfill their needs.

Indeed, the population could not exist without all three habitat areas – the nesting habitat, winter habitat and stopover habitats. McConnell compared a human automobile trip of about 3,000 mile from New York to California. The driver would have to stop at three or four motels to rest and about 12 restaurants for meals. So it is for Whooping Crane needs for “stopover habitats”.

FOTWW is often asked, what is the organization doing for Whooping Cranes? Our answer is that we are continuing our major project to protect and help manage “stopover habitat” for Whooping Cranes. It’s happening on COE lakes, Indian Reservations and military bases throughout the migration corridor. We recently completed assessments on 27 lakes on Corps property and two hundred and ninety-eight ponds of various sizes (1/2 ac. to 4 ac.) on seven military bases.

Importance of Habitat for Whooping Cranes

FOTWW has very little funding assistance and decided to work with government agencies and Indian tribes who own land distributed all along the migration corridor from North Dakota to Texas. Land is the most expensive item and the Corps, military and Indian tribes already own thousands of acres. McConnell met with these land owners and explained the habitat needs of Whooping Cranes and how they could contribute without interfering with their normal missions. Fortunately, there was exceptional support and FOTWW has been working on the mission for over three years.

FOTWW appreciates all involved with making preparations for a productive and enjoyable habitat evaluation official visit.

The following photos and descriptions will assist readers to understand our work.

***** FOTWW’s mission is to help preserve and protect the Aransas/Wood Buffalo population of wild whooping cranes and their habitat. ***** 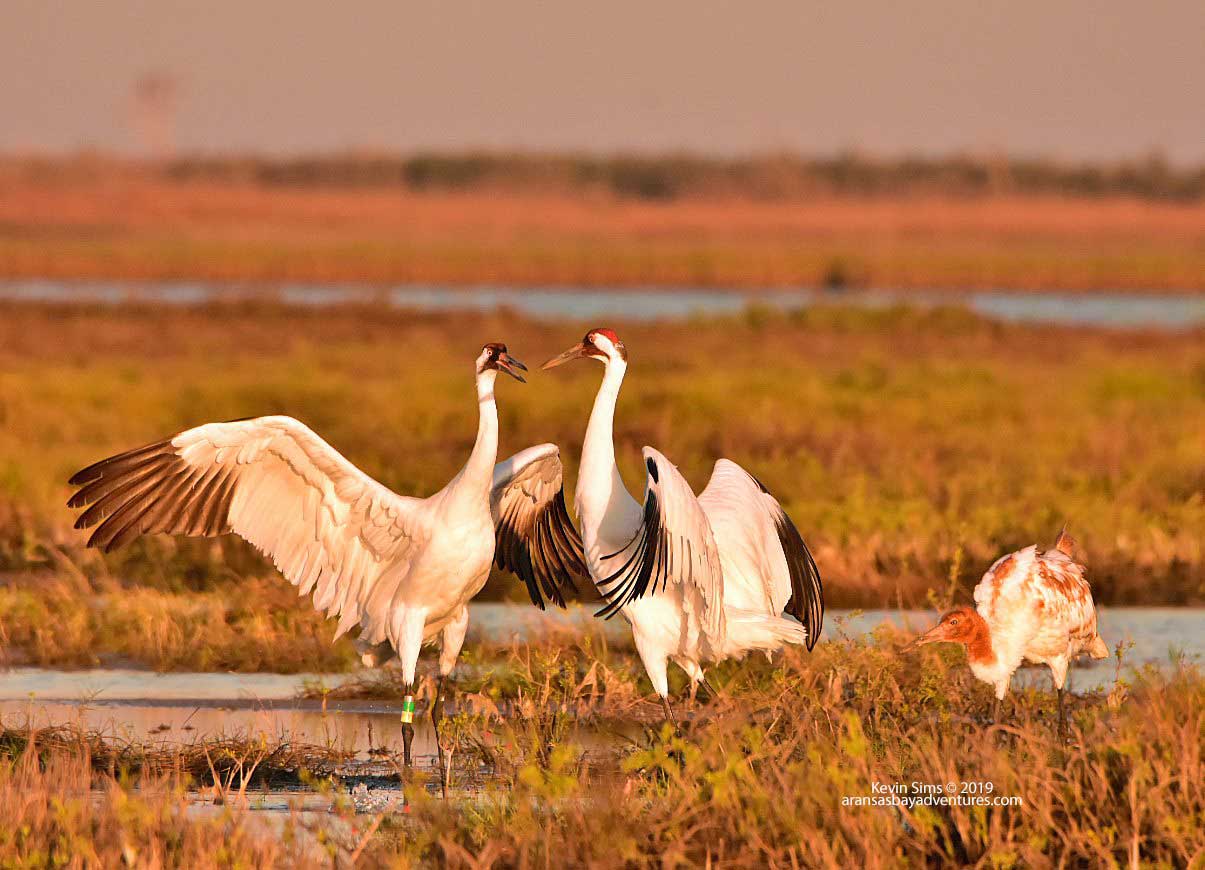 We plan to begin our annual whooping crane abundance survey this week, and our goal is to fly a minimum of six survey days. Phil Thorpe, with our Migratory Birds Program, will be piloting us in a wheeled Kodiak. Hopefully our dreary and wet weather as of late will clear enough to allow safe flying conditions.

In addition to an overall estimate of the winter population size, the survey provides us an estimate of how many juveniles were “recruited” into the population this year. Simply put, the only way to effectively grow a population is for births to exceed deaths—i.e. recruiting juveniles into the adult population. The past few years’ increases have been tied to high numbers of fledged chicks on the breeding grounds, but Canada only estimated 23 fledged chicks during their survey this past August. For comparison, that is 40 fewer chicks than reported in the August 2017 survey. Annual variation in fledged chicks is to be expected and we’ve seen this amount of fluctuation in the historic survey records dating back to the 1950’s. Weather in the breeding grounds is often a major driver of chick fledging rate in Wood Buffalo National Park. This past June, when most eggs were hatching, was unseasonably cold and wet—not ideal conditions for early chick survival.

Efforts to trap and mark whooping cranes here at Aransas National Wildlife Refuge (NWR) for our telemetry study is ongoing, and thus far this winter we have marked 6 adult whooping cranes here on the Refuge with cellular telemetry devices. With these devices providing locations every 15 minutes, we are able to understand daily movements (night and day) and habitat use at a level that wasn’t available even a few short years ago. You can find more about our use of this revolutionary technology to conserve whooping cranes here.

One of the new developments that this technology is revealing is how and when whooping cranes move around here on the wintering range. In the past, we understood wintering whooping cranes, particularly mated pairs, to stay in a “territory” or one general area of a few hundred acres, all winter. With the telemetry data, we are starting to see a much more complex picture of movement, with some whooping crane pairs mostly following our traditional understanding of a single territory and others making multiple movements across the entire wintering range throughout the winter. It is difficult to say whether this is related to food availability or simply individual differences, but it does help us understand the need to focus our conservation efforts at a landscape scale—well beyond Refuge boundaries.

There are several opportunities for visitors to Aransas NWR to view whooping cranes in publicly accessible areas this winter. Whooping cranes have been consistently sighted from the Heron Flats viewing deck, the observation tower and the tour loop near Mustang Slough. We also consistently observed a family group of whooping crane in the Mustang Lake salt marsh in front of the observation tower, so you have an excellent opportunity to view whooping cranes at a respectful distance. Please come by and say hello to us at this year’s upcoming Whooping Crane Festival starting February 21 in Port Aransas!

Salinity at GBRA 1: averaging around 11 parts per thousand.