GIVING TUESDAY NOW | A GLOBAL DAY OF GIVING AND UNITY 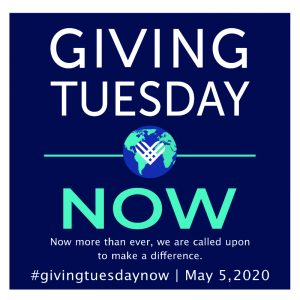 #GivingTuesdayNow is a global day of generosity and unity, a day to come together and give back in response to the unprecedented need caused by COVID-19, no matter who or where we are.

In the past, we have been ever so grateful to those how generously donated to Friends of the Wild Whoopers, (FOTWW) on GivingTuesday. We still feel it is very important to continue our mission of protecting the whooping crane habitat along the Central Flyway and we will continue to do so.

~ However, this year, we are asking you to please consider giving to and helping the small privately owned businesses in your village, town or city. These small shops, pubs, bookstores, restaurants, and boutiques are what keep America going and are the heart of America. They need our help and FOTWW hopes that you will do what you can to help these small businesses on Giving Tuesday.

Friends of the Wild Whoopers, (FOTWW) is joining the millions of people around the world celebrating the 50th anniversary of Earth Day by fighting for the future of Whooping Crane habitat along the Central Flyway. To date, FOTWW has evaluated and made recommendations on 41 military bases, 7 of the 8 Native American reservations, and 34 Army Corps Of Engineers lakes in 7 states along the traditional migration corridor. With the wild population increasing and climate change, these stopover locations will serve a more important role as habitat along the Gulf Coast disappears. #EarthDay2020

Some of the birds in the world’s only remaining wild population of Whooping Cranes have begun their annual spring migration back to their nesting grounds at Wood Buffalo National Park in northern Canada. The others will follow soon. They are repeating an event that has been going on for thousands of years. Following good conditions during the winter season on their Aransas National Wildlife Refuge winter grounds, the Whoopers appear to be in healthy condition. So, as the remaining Whoopers join the early birds and depart on their 2,500 mile migration to their nesting grounds there is hope for a successful reproduction and nesting season.

Traveling in small groups the Whoopers are expected to begin arriving at their nesting grounds during late April and May.

Friends of the Wild Whoopers is asking the public to report any Whooping Cranes they see along rivers, wetlands and fields. Report your observations to the wildlife agency in your state.

If you should observe a whooping crane as they migrate along the Central Flyway, please report them to the proper agencies. We have compiled a list of agencies and contact information below. If you need help with identification, please click on our Whooper Identification page.

Whooping Crane sightings at or near Quivira NWR should be reported to:
Quivira National Wildlife Refuge
620-486-2393
They can also be reported to this email:  quivira@fws.gov

***** FOTWW’s mission is to help preserve and protect the Aransas/Wood Buffalo
population of wild whooping cranes and their habitat. *****
Friends of the Wild Whoopers is a nonprofit 501(c)3 organization.

The Aransas-Wood Buffalo population of whooping cranes nests and rears their young in Wood Buffalo National Park, Alberta/Northwest Territories, Canada, during spring and summer. After the chicks fledge, adults and juveniles migrate 2,500 miles through seven states to the U.S. Fish and Wildlife Service’s Aransas National Wildlife Refuge on the Gulf Coast of Texas where they spend the winter.

Cranes must stop 15 to 30 times to rest and feed during their migration. Radio telemetry conducted by the U.S. Geological Survey and direct field observation has documented migration stopovers that often occur in habitats associated with water resources development projects managed by the U.S. Army Corps of Engineers throughout the migration corridor.

The founder and president of the non-profit Friends of the Wild Whoopers, (FOTWW), Chester McConnell worked with Dr. Richard  Fischer of the U.S. Army Engineer Research and Development Center; Jeremy Crossland, USACE Headquarters land uses and natural resources program manager; and Michael Champaign, USACE, Fort Worth District biologist, to develop and finalize a Memorandum of Understanding between the Corps of Engineers and FOTWW to assess whooping crane migration stopover habitat and identify measures to maintain or improve that habitat on water resources development projects in the migration corridor.

To read David Hoover’s complete article about the USACE/FOTWW partnership and “stopover habitat” project, click here and scroll to Pages 34-35.